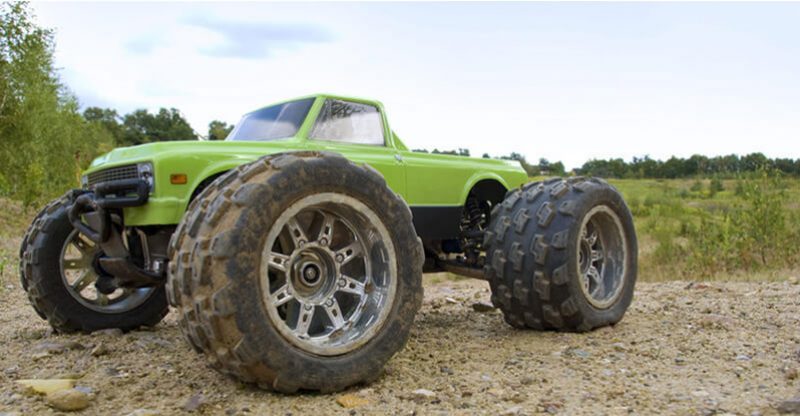 RC Vehicles are fun for kids, and a lifelong passion for many adults as well. You can’t fault people for considering battery operated RC cars and buggies as kids toys. But a gas RC truck? Now that is a whole different ballgame altogether.

When you combine highly combustible fuels like gasoline or nitro with a small RC controlled vehicular chassis, what you get is a toy that is definitely for the big boys, not little kids! Are you ready to play with speed and fire, in the most literal sense of the word?!

Then you should take a look at the world of Gas RC Trucks! These are remote controlled model trucks. The controls and radio technology used are identical with most RC toys out there.

What differentiates them from the rest is the motor and fuel system. Regular RC toys use battery power, while Gas RC Trucks are powered by actual fuels, like gasoline.

1. The Main Components of a Gas RC Truck

Four main basic components can be found on all Gas RC trucks, or any RC vehicle out there. The fuel and power system is the only thing that is different in gas RC trucks.

All RC devices come with an ergonomically designed hand-held control system. This control box has a radio transmitter fitted inside. When you move the joysticks or press the different buttons on the control device, these commands are relayed as radio signals to the RC toy.

This is a small antenna like device installed on the model vehicle. It receives the radio signals from the controller and sends it to the various moving parts of the truck.

There is a difference between gas and nitro RC trucks here. Gas trucks have built-in fuel pumps, which allows you to tinker with the fuel tank positions inside the fuselage. In nitro powered trucks, this feature is absent, and you will manually have to connect vent lines to the exhaust.

Gas engines are bigger than their nitro counterparts. They are regular IC engines and require burning gasoline fuel (using ignition) to produce power for movement.

The single main advantage that a nitro truck has over a gas powered version is pure speed. Gas engines cannot hit the top speeds that nitros are capable of. But in nearly every other metric, gas trucks are superior.

They are more powerful than nitro trucks, despite lacking in explosive speed and also require much less fuel. That extra efficiency contributes to fewer fuel costs, which can be prohibitively high for nitro trucks.

The affordability factor is extended further by the relatively less maintenance than gas motors require. They require tuning much less frequently than nitro engines. The latter are rather fragile and can burn out pretty quickly.

Cooling is one other area where nitro engines hold a slight edge over air-cooled gasoline engines. In nitro engines, they use methane for cooling.

To compensate for the ack of methanol cooling, gas engines often have ventilation holes in the cowling. 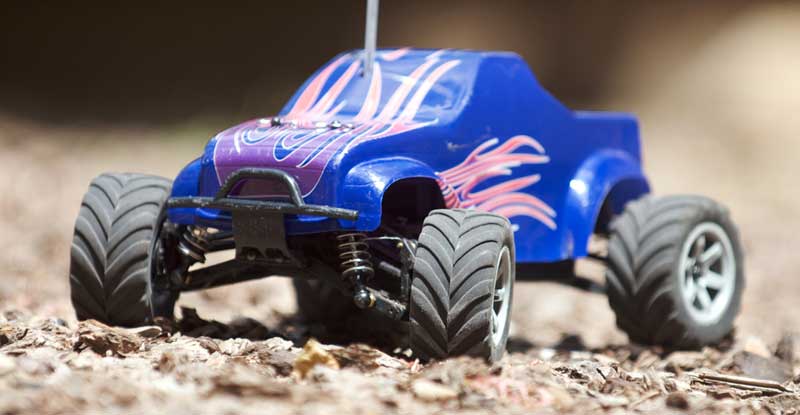 Spark plugs in an internal combustion engine need an onboard source of electricity to work. In usual cases, this is satisfied by using a battery. But on gas RC trucks, this job is handled by magnetos, which generate electric pulses when the engine rotates.

Magnetos are extremely reliable, but extremely heavy as well. Since they cannot make electricity from a standstill, you will need electric starters to fire up a gas RC truck. This same situation is applicable for nitro trucks as well.

This is the standard option on most gas RC trucks in the market at present. Unlike in the magneto, this one comes with an onboard battery that gets the spark plug started. As a result, you have the option to hand start these trucks.

For maximum power, the timing of the spark is incredibly important. Electronic systems are calibrated to adjust themselves according to engine speed changes, to deliver optimum power.

Magnetos deliver maximum performance when the engine hits its top speeds. In contrast, electronic systems are more versatile thanks to their adjustments and can give maximum performance at all speeds. They are easier to start, and idle better than engines with magnetos.

RC truck veterans have pointed out time and again the potential for radio interference from gasoline engines. The ignition systems in these engines are the most likely culprits. But the potential for this can be reduced and often, avoided altogether.

All you need to do is ensure some distance between the RC receiver and the ignition system. The ideal distance is 12 inches.  Also, avoiding metal pushrods in the throttle system can also help prevent interference.

The situation is created by an electromagnetic field which arises inside ignition system, as a result of non-resistor spark plugs preferred in such engines. Using a resistor type plug can help reduce the interference.

This plug is easily available in auto parts stores. You can also try upgrading to a spread spectrum radio system, as interference is caused mainly by 72MHz systems. 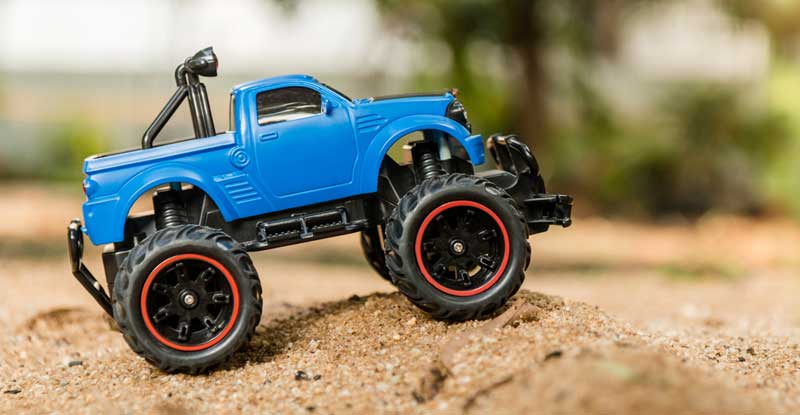 Before we dissect the different kinds of gas powered RC toys, lets us explore the all-important question regarding gas and nitro gas RC vehicles: which is more fun?

The straight answer will have to be nitro. Though they have their niggles and extra expenses, nitros have something that gas and electric cars just don't have: explosive power. Those blazing speeds are what sets RC nitros apart from the rest.

Now on to the different classes of RC vehicles. There are three basic varieties that you can try, each built for a specific kind of RC experience. They are:

Cars: these look like regular sports cars, and they are built mainly for one thing: pure speed. They hug the ground, have a low, sleek profile, and have extremely smooth tires. Street racing is what you would be doing with these bad boys. They mostly have two wheel drives and offer the highest speeds.

Buggies: They straddle the middle ground between the sleek cars and the rugged trucks. Buggies have more speed than trucks and more ground clearance than the cars. So they are great fun for some off-road antics.

They have four-wheel drives for this purpose. With heavy-duty suspensions and shock, not to mention massive tires, these are built to withstand a lot of punishment.

As far as the steering and controls are concerned, most RC cars and trucks have pistol grip controllers, with a steering wheel, and throttle for speed.

Receivers are powered by AA batteries, ad the system usually uses the 2.4GHz band. So you can have interchangeable controllers.

When you get a new gas RC truck or car, make it a point to read the manual. It can save you a lot of time and make your life easier. Then you can add some fuel, gasoline or nitro, depending on the model.

To get the vehicle primed for ignition, put the plow plug igniter onto the plug. Now all you have to do is take the starter cable and tug at it to get the engine rolling.

The glow plug is a very simple concept in action. The igniter gets it lit, which causes temperature buildup in the engine. Once combustion begins, the engine is kept running by its compression.

And as with any IC engine, a mix of fuel and air ignites. Once the throttle is pressed, the carburetor opens up, allowing more and more air and fuel mixture to combust. The result is more power and more speeds.

Like all motor and engines, gas RC engines also need a break in procedure. This will allow the engine to slowly get up to speed and get used to high temps. The run-in or break-in process improves the performance and reliability of engines.

You should always check the manual for the manufacturer recommended procedure. Or else you can do figure eights for some time on a smooth flat surface at 1/4th throttle, with the engine exposed for better cooling.

What is true for your car is also true for your RC car. Don't spend all that money on an expensive RC car, only to flush it down the toilet by using cheap quality fuel.

Get quality branded fuel for maximum performance and engine life. Make sure the fuel mixes are at the recommended levels if using nitro.

Stock up on Spare Plugs

Glow plugs don't last long by their very nature. But on the plus side, they are extremely cheap. So spend some money to stock up on these small things. That way, you won't be unexpectedly left in the lurch. 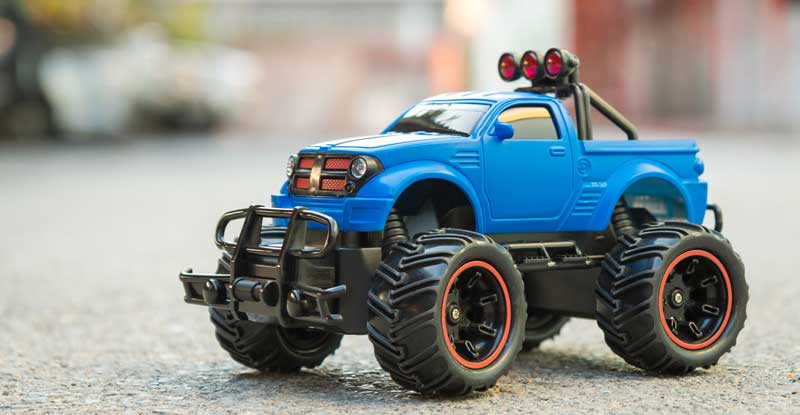 Most quality RC trucks can handle a lot of punishment, dirt, and dust from off-roading adventures. But that doesn't mean that they don't need regular cleaning and maintenance. Focus on the air filters and engines, as well as the chassis.

Screws are always vulnerable to vibes, which can be plentiful in these small cars and trucks. Thread locking adhesives can be used on all the connecting metal parts. They can help prevent the screws from coming loose with use.

Check your air filters. You will find gold or black needles right next to the filters. These are the high speed and idle needles. The idle needle has a tiny 1mm hole inside. Engage the brakes after removing the filters.

If the hole is closed, adjust the needle until you get it slightly open. Always check the manual before trying these steps. And if you are a noob, stick with the factory settings.

Always use the recommended fuel mix, at the exact recommended percentages. Always remember to turn on the transmitter first, and turn it off the last. Remember to keep the wheels clean.

And do some after run maintenance to help remove rust and improve overall engine health. And finally, always use your common sense, don't get too reckless, care for the safety of others, and do not inhale those nitro fumes!

That, in a nutshell, is how gas RC trucks work. They are high maintenance toys that deserve your TLC. And since they usually entail a significant investment, regarding maintenance and fuel costs, it pays to learn more about these fascinating little marvels of engineering.

Depending on your preferences and budget, you can go for fast cars, rugged 4WD offroaders, or versatile buggies. Whatever you choose, don't forget to have fun! 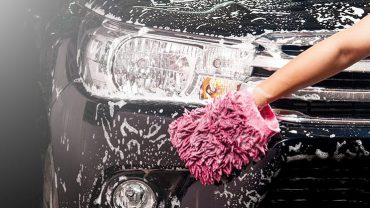