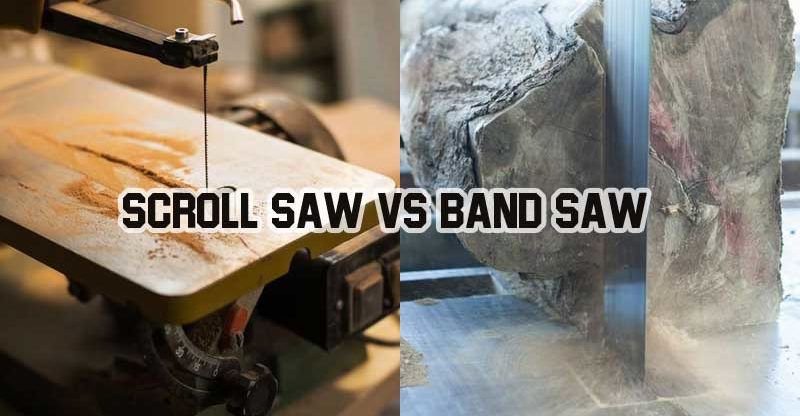 Most hobbyists don’t have the luxury of having limitless budgets and they often have to choose between certain tools to get for their workshop.

All workshops can benefit from having some kind of power saw, but which one should you get? In this article, we will be taking closer looks at the main difference in scroll saw vs band saw. We’ll also help you see which of those two power saws deserves a spot in your workshop. 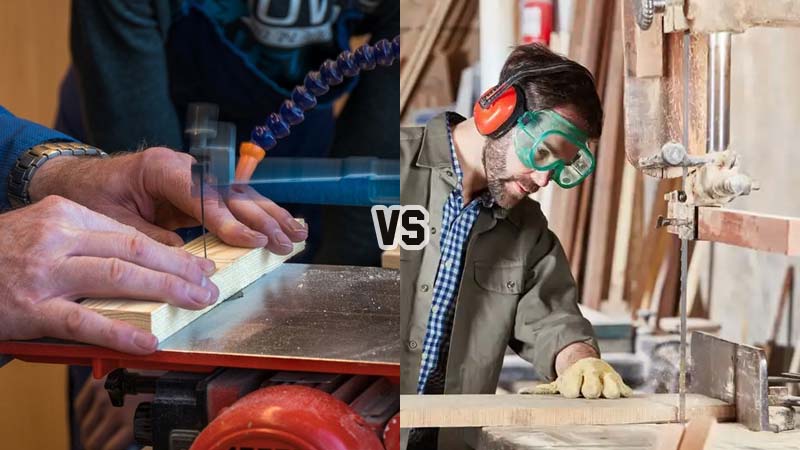 The scroll saw is one of the more interesting power tools that you will find in any workshop.

Even the way it got its name is quite interesting. In the past, this particular type of saw was often used for scroll work and other applications where scroll-head designs were sought. Since it was used so much in that capacity, it just became known as the scroll saw and the name has stuck.

Scroll saws are often likened to jigsaws because they are used to create curved cuts. However, scroll saws are considerably sturdier tools. Scroll saws can even take on some heavy duty applications that may not be possible for jigsaws.

What Are the Advantages Of Using a Scroll Saw? 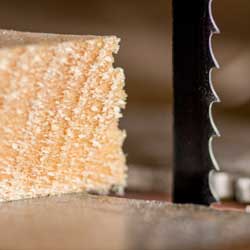 Curved cuts are possible with both jigsaws and band saws, so having the ability to execute those is not exclusive to the scroll saw. However, what the scroll saw can do that other saws cannot is create incredibly intricate cuts.

If you’ve seen tables or chairs with intricate patterns carved into them, there’s a good chance that a scroll saw was involved.

The band saw is yet another power tool that can slice into the wood and end up with a curved cut on the other side. That’s why you should not be surprised that it has also been likened to a jigsaw.

Plus, if you need to chop a large piece of lumber down to size, then it’s not a bad idea to turn on the band saw and get to work.

Band saws often have cutting surfaces included and they can take up quite a bit of room in a workshop. If you have a smaller workshop or just don’t want anything clogging it up, then you can still get a band saw because there are now portable variants of it that are available.

The typical band saw is also designed to cut through a wide array of materials.

What are the Advantages of Using a Band Saw?

Jigsaws and scroll saws can create irregular cuts, but if that’s the type of cut you need, then the band saw is what you should use.

Band saws are also powerful enough to carve into even thick pieces of lumber and the best part is that the cuts will turn out smooth instead of jagged. 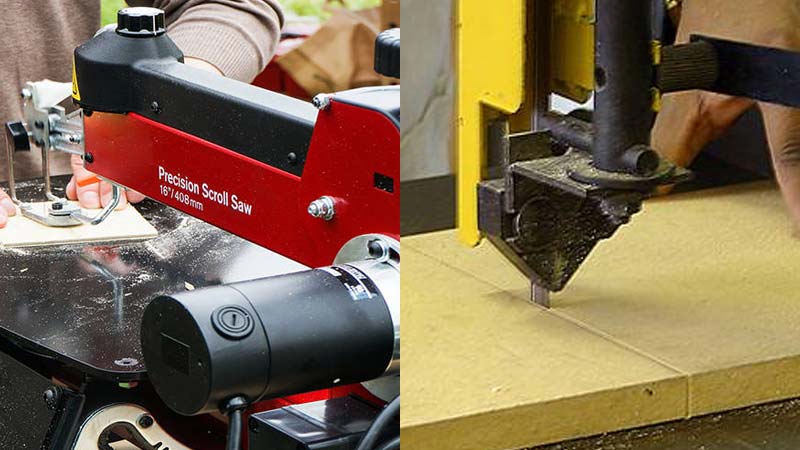 There’s certainly more than a bit of overlap when looking at the possible applications for scroll saws and band saws, but it’s important to remember that these two power tools still have different specializations and uses.

1.They Differ In Purpose

Scroll saws are for etching intricate patterns into a surface. You can think of them almost like lasers that are used to burn patterns into wood and other materials, with the difference being that scroll saws go deeper.

Band saws are not quite as delicate, but if you ever need something to quickly and cleanly cut through numerous pieces of lumber or any other type of thick material, this is what you want to have on hand.

Unless you want to ruin your scroll saw, you should avoid using it to cut through any kind of thick material. The blades used in scroll saws are too delicate for those heavy duty applications.

Conversely, you can put band saws to work all you want. Even materials that are up to 30 inches thick can be processed by a good band saw.

Highly detailed cuts are so much easier to pull off if you’re using a scroll saw. It’s also suitable for making curved cuts.

Band saws lack the ability to create great detail with its cuts, but they do shine when it comes time to create straight cuts in a hurry. Notching irregular cuts into thick materials is also possible with a band saw.

You could say that a scroll saw is more versatile because it can execute all kinds of simple and complex cuts, but then again, band saws can work with a wider range of materials, so they are quite versatile too.

On average, scroll saws are cheaper than band saws because of their target demographics. Scroll saws are often purchased by hobbyists, while band saws are typically picked up by woodworking professionals.

You will still be able to find some affordable band saws out there if you really want one for your workshop, though they may be lacking in certain areas.

Explaining How A Scroll Saw Works 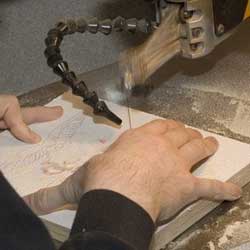 Scroll saws make use of distinctly shaped blades. They are usually quite thin. The majority of scroll saw blades are no thicker than a quarter of an inch. It’s important for them to be that thin because they have to make very small and precise cuts into the wood.

The scroll saw blade can extend up to eight inches in length.

Again, that length is important because the blade has to be able to move up and down through the hole that can be found in the middle of the scroll saw’s cutting surface. That length makes it possible to get the materials in between the blade and the table to be cut.

Once activated, the blade attached to both the arm of the scroll saw and the table below begins to move up and down. The material you put in the path of the moving blade will be cut into.

You are the one tasked with moving the material around to achieve a specific type of cut or to create a particular pattern. If you’re not familiar with using scroll saws, it would be best to get a wider piece of wood so that you can move it along the blade without having to bring your fingers anywhere near the blade.

Having that much control over the cutting is something people value because it makes it easier for them to come up with specific patterns.

Some scroll saws have arms that can be tilted so that you can then use the blade to cut from the interior of the material going out to the edges.

Explaining How a Band Saw Works 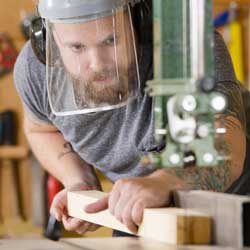 The classic band saw has been around for a long time and it’s easy to see why. You can do so much with band saws because they are capable of cutting through just about anything with relative ease and with minimal waste.

A typical band saw has two wheels. One wheel is situated above the cutting surface, while the other is located below.

You may be able to see band saws that feature more than two wheels. More often than not, the extra wheels are added to increase the capacity of the band saw and to distribute the load better.

One of the more interesting features of the band saw is the type of blade that it uses. The design of the blade itself is the inspiration behind the name of this power tool. The blade goes around the two wheels of the saw in a continuous band. Once the wheels start to turn, the blade will also move.

The thinner blades in band saws appear almost like wires, but if you take a closer look, you will see that they are covered with teeth. After the band saw has been turned on, the blade begins to move downward through the cutting surface and the teeth drive through whichever material you have resting on the cutting surface.

You won’t be able to cut from the inside going out using a band saw, but you can quickly transform a thick piece of lumber into smaller planks in a hurry using this power tool.

Wearing protective gear is always a must when you’re using a power tool. When it comes to scroll saws and band saws, it’s a good idea to put on some safety goggles so that nothing accidentally gets into your eyes. You can also put on some safety gloves, but make sure that your fingers can work freely in them. Gloves that restrict the movement of your fingers are not helpful when using scroll saws and band saws.

Don’t let your fingers get too close to the blades whenever you’re using either the scroll saw or the band saw. This is why it’s important to work with larger pieces of wood so that you can move them around without having to put your fingers near the moving blades.

Lastly, always turn the saws off when not in use. You could end up mindlessly placing your hand near those blades and it could get ugly if they’re turned on. Just shut them off when they’re not needed and you’ll be fine.

So, should you have the scroll saw or the band saw in your workshop? Honestly, it’s a good idea to get both if you can.

Scroll saws and band saws specialize in different areas. There are things scroll saws can do that band saws can’t and the same holds true going the other way.

Hopefully, you have the budget to acquire both power tools because they will be highly useful additions to your workshop. 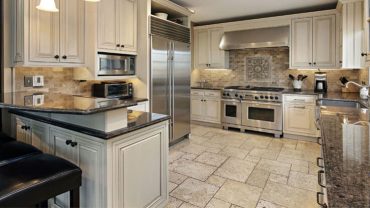