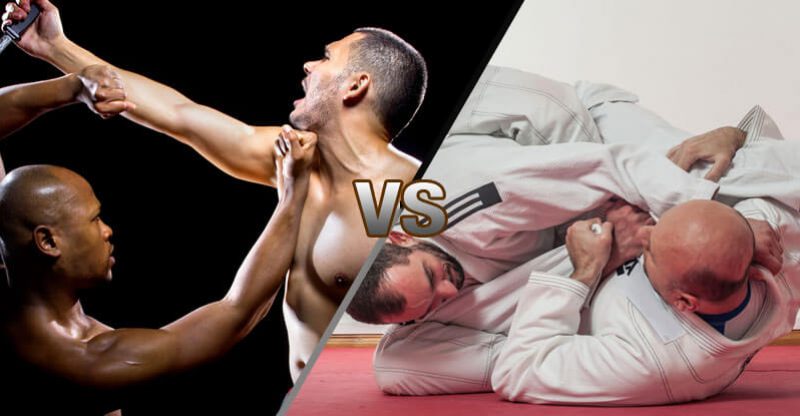 Should you learn BJJ or Krava Maga? We compare the two martial arts disciplines and how they work. Krav Maga vs BJJ is an ongoing discussion, but the two actually share some similarities.

Krav Maga and Brazilian Jujitsu are both for self defense.

While BJJ has been around for hundreds of years, Krav Maga was developed in the 1900s but has grown rapidly and is now widely practiced.

Contents show
1 Krav Maga vs BJJ Full Guide
1.1 Krav Maga History
1.2 Krav Maga Style
1.3 History of Jujitsu
1.4 Jujitsu Technique
1.5 Similarities
1.6 Differences
1.7 Why Learn to Defend Yourself on the Ground?
1.8 Why to Avoid Fighting on the Ground
1.8.1 1. The ground may injure you
1.8.2 2. There May Be More Than One Attacker
1.8.3 3. Size Matters A Lot And You’ll Tire Fast
1.9 Krav Maga Ground Fighting & Defensive Techniques
1.9.1 1. Learn To Protect Yourself As You Fall Or Are Wrestled To The Ground
1.9.2 2. Learn Releases Vs Common Attacks When Attacker Is On The Ground Also
1.9.3 3. Learn to Defend Yourself On The Ground Against Standing Attacker(S)
1.9.4 4. Get To Your Feet Quickly And Safely
1.10 How to Do the Krav Maga Elbow Strike Krav Maga began with Imrich Lichtenfeld who developed it in the 1930s in Eastern Europe. As an ex wrestler and boxer, Lichtenfeld honed the technique as a means of self-defense.

It became popular and is now taught in martial arts classes worldwide. This martial arts is also taught on a regular basis in Israeli military schools.

This martial arts aims to protect and stop the attacker without killing them. Krav Maga includes kicks, elbows, punches and other martial arts techniques.

In many fitness clubs and martial arts classes, Krav Maga is combined with aerobics to make it more enjoyable. Of course you don’t need to integrate Krav Maga with aerobics or other types of workouts, and you can practice it as a standalone discipline.

The advantage of incorporating it with other routines is you’ll be working out the rest of your body, and a fit body is ideal for mastering Krav Maga and other MMA.

Jujitsu dates back to 1100 to 1500 AD in Japan. How it originated is a mystery but the samurais played a key role in its development.

This martial arts technique was developed originally as a last resort in case fighters lost their weapons during battle. Since then, jujitsu has evolved into different forms.

The methods for jujitsu include holds, blocks, gouges, hits and kicks. Jujitsu is ideal for those who want to learn to defend themselves even without weapons.

There are different types of jujitsu but they all work on the principle of using the attacker’s attacks to your advantage.

A good example of this is when an attacker tries to push you. Rather than push back you pull them down and they lose momentum.

Krav Maga and BJJ are both forms of self defense. The aim is to immobilize your attacker so you can escape.

More than anything, Krav Maga and BJJ are meant to deter attackers so you’ll use only the minimum force needed to take down an opponent.

For all the similarities there are differences as well. Jujitsu is more complex while Krav Maga is relatively easier to learn.   Krav Maga is also more suited for street fights as it puts emphasis on fast self defense.

Why Learn to Defend Yourself on the Ground?

Because in a street fight or when you’re assaulted, chances are you’ll end up on the ground. If you’re going to be taken down you might as well learn how to defend yourself.

This is where learning about Krav Maga is good because it borrows elements from wrestling, judo, MMA and BJJ.

Why to Avoid Fighting on the Ground 1. The ground may injure you

A single throw and you’’ll end up with bruises, wounds and cuts. Add to that you’ll get punched and kicked.

2. There May Be More Than One Attacker

It is hard enough to deal with an attacker if you’re on the ground. This becomes an even bigger problem if two or more people are attacking you.

By learning Krav Maga or jujitsu you’ll be ready to face them. If you know how to defend yourself there is less chance you’ll end up falling on the ground and getting beat up.

Another reason to avoid fighting on the ground is it will wear you out. All the grappling, punching, kicking and struggling will drain your energy.

1. Learn To Protect Yourself As You Fall Or Are Wrestled To The Ground

Krav Maga teaches you how to protect yourself and how to avoid falling down quickly. By applying break falls and rolls you’ll be in a better position to handle these blows.

2. Learn Releases Vs Common Attacks When Attacker Is On The Ground Also

Krav Maga, BJJ and other MMA will show you how to defend yourself against kicks, punches and even those assaulting you with a knife.

One of the advantages of Krav Maga is your size doesn’t make much of a difference. Even if you’re small you can defend yourself.

3. Learn to Defend Yourself On The Ground Against Standing Attacker(S)

Krav Maga enables men and women to defend themselves standing up or on the ground. This allows you to engage the attacker properly.

4. Get To Your Feet Quickly And Safely

Even if you’re down on the ground you’ll learn how to get back up and immobilize your attacker.

How to Do the Krav Maga Elbow Strike

While the debate as to which is better, Krav Maga or BJJ, will continue, it should be obvious by now both are more than adequate and complementary.

You may pick one martial arts over the other, but you’ll benefit either way as you’ll learn how to repel attackers and protect yourself. 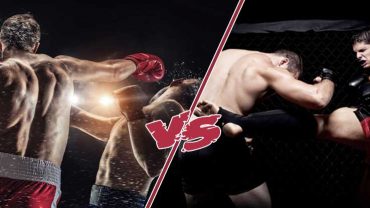